Over the last 50 years, space exploration and space utilization have spread rapidly. Consequently, solar activity is now known to have a significant impact on the global environment as well as human socio-economic systems. For example, the giant solar flare observed by the British astronomer Richard Carrington in 1859, called the Carrington event, caused powerful magnetic storms. If such a flare occurred in the modern era, power, satellite, aviation, and communications networks would possibly suffer from damage on a global scale. In addition, analyses of the latest stellar observations and of cosmogenic isotopes in tree rings suggest the possibility that even larger solar flares may occur. However, the mechanisms behind solar flares and the subsequent processes have not yet been fully elucidated. Therefore, modern society, which is supported by advanced information systems, is at risk from severe space weather disturbances, which are caused by such solar explosions. Therefore, establishing a scientific basis for accurately predicting the impact and variability of the space-earth environment is important.

This project aims to develop a synergistic interaction between predictive and scientific research of solar-terrestrial environmental variation to establish the base of next-generation space weather forecasting. This project is a research collaboration activity of the ISEE with support from a Grant-in-Aid for Scientific Research on Innovative Areas from MEXT/Japan’s “Project for Solar-Terrestrial Environment Prediction (PSTEP, PI: Kanya Kusano).”
This project coordinates interdisciplinary research on the following subjects: 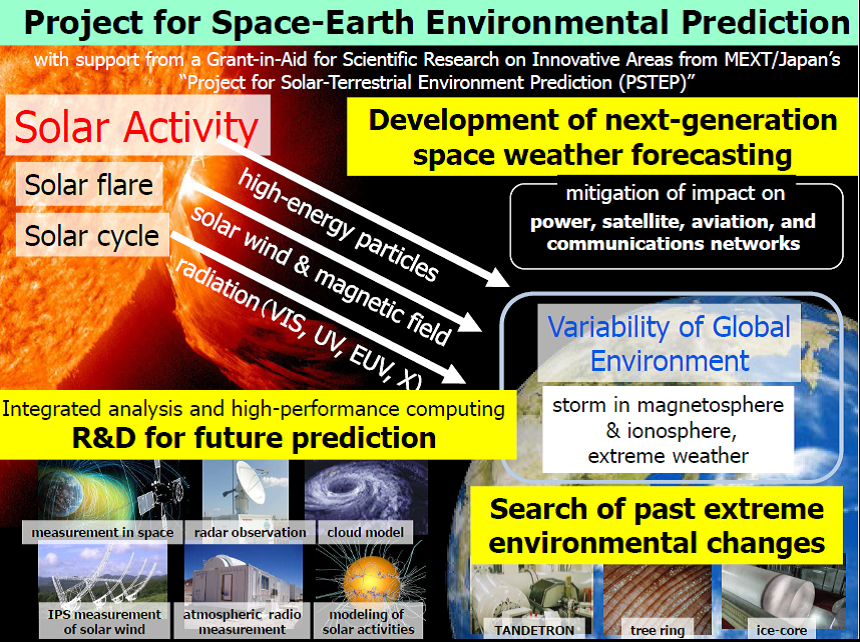