Identification of generation of plasma waves in geospace.

There are several plsama populations in geospace and variations of these plasma populations cause various phenomena, such as explosive enhancement of aurora as well as rapid variations of space radiation. Several plasma waves are observed in geospace, which cause dynamical evolution of plasma through wave-particle interactions. Electro-Magnetic Ion Cyclotron (EMIC) waves are a kind of gepspace plasma waves at the ULF frequency range. The EMIC waves cause the proton aurora through the pitch angle scattering of ring current ions. And the EMIC waves are important to cause significant losses of ring current ions as well as MeV electrons of the radiation belts. The research team including Dr. Masafumi Shoji and Yoshizumi Miyoshi at CIDAS/ISEE has developed a new analysis method to identify the formation of ion hole in the velocity space, which is an evidence to indicate the energy exchange between EMIC waves and ions. The team analyzed the data from NASA/THEMIS satellite and identified the formation of the ion hole for a few seconds associated with the generation of EMIC waves. The team investigate the physics of the hole formation by the large-scale computer simulation using the Super Computer, and confirmed that the ion hole works a important role for the energy exchange between EMIC waves and ions and resultant growth of EMIC waves.
The results are reported in an article of Geophysical Research Letters.
http://onlinelibrary.wiley.com/doi/10.1002/2017GL074254/full 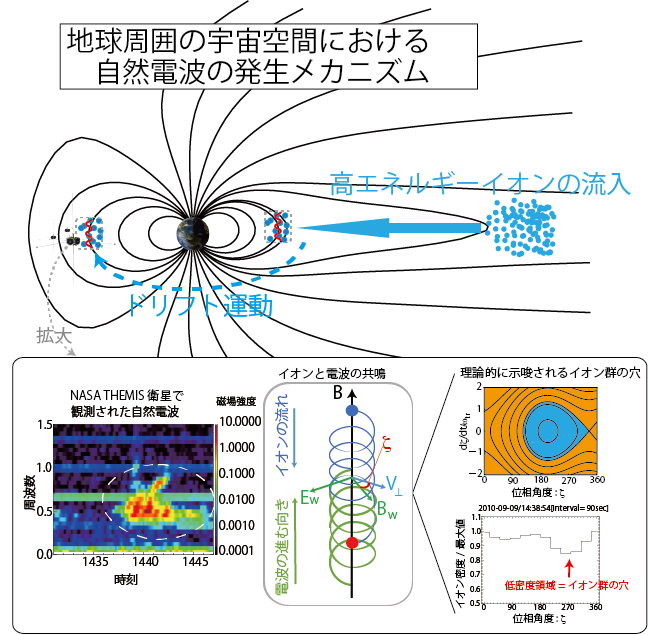