Solar activity, which corresponds to the sunspot number, shows an 11/22-year cycle; however, it undergoes long-term variability on cycles ranging from decades to several thousand years. As long-term solar activity has coincided with terrestrial climate varying over several thousand years, many researchers have reported that long-term solar activity as well as volcanic activity may be one of the reasons for natural climate variability. In particular, the years between the 1650s and the 1700s are well-known as the Maunder Minimum, during which the sunspot number was significantly small and the terrestrial climate was reported to have fallen into the so-called Little Ice Age.

This research project aims to reveal how solar activity affects the terrestrial climate and environment with a collaboration between researchers from fields such as solar physics, meteorology, oceanography, paleoclimatology, space physics, and cosmic ray physics. This collaborative research focuses on the following issues, which will be studied by both domestic Japanese and international researchers:

Appendix 1：Solar wind and the interplanetary magnetic field (IMF) fill the heliosphere, and the intensity of IMF changes in an 11-year (or 22-year) cycle, which corresponds to the solar cycle. Because solar activity originates from sunspots, the intensity of the IMF corresponds to the sunspot number. However, high-energy charged particles, i.e., galactic cosmic rays, arrive from outside the heliosphere and can be scattered by the IMF as well as the magnetosphere, which originates from the geomagnetic field. Thus, their intrusion into the magnetosphere highly depends on the solar activity as well as the geomagnetic intensity.

Note that galactic cosmic rays produce radioactive isotopes in the terrestrial atmosphere, which are called as cosmogenic isotopes, with the collapse of atmospheric atomic reactions. The production rate of the cosmogenic isotopes corresponds to the intensity of galactic cosmic ray intrusions into the atmosphere. Thus, both solar activity and geomagnetic intensity suppress the production rate of the cosmogenic isotopes. The most representative cosmogenic isotopes in our research fields are radiocarbon (14C) and beryllium-10 (10Be). The half-life of 14C is 5730 years and that of 10Be is 1.51 million years. This research project uses our TANDETRON Accelerator Mass Spectrometer to measure 14C and 10Be and to extract long-term paleo-environmental data with a focus on solar activity and geomagnetic intensity. 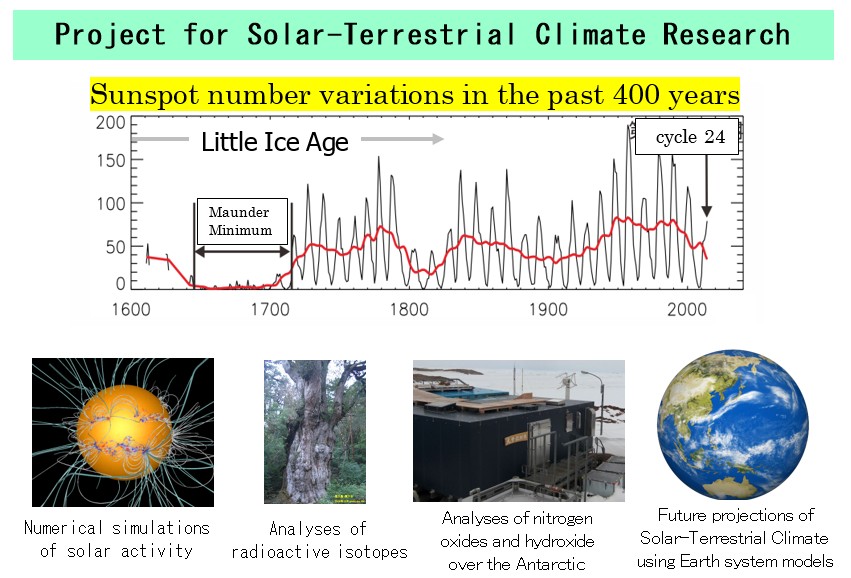