Center for Orbital and Suborbital Observations

To the website of Center for Orbital and Suborbital Observations

Since subjects of this research institute encompass natural phenomena over a wide region ranging from the Earth’s surface to outer space, we are expected to perform empirical and advanced research by observations that are optimized for each region and phenomenon. In particular, collaborations between industry, academia, and the government have led to remarkable technological developments in observations by aircraft, balloons, sounding rockets, and spacecrafts, where progress has been made significantly around the world as well. At the Center for Orbital and Suborbital Observations, we take full advantage of the capabilities of an interdisciplinary collaborative research institute, based on a comprehensive perspective of the space-sun-Earth system. In addition to a ground-based observation network that has already been set up by research institutes and the Center preceding this institute, we develop and implement innovative observation projects in subjects and regions where orbital and suborbital observations are essential, and also promote the technological developments necessary for their implementation.

The Center for Orbital and Suborbital Observations plays a key role in aerial observation in Japan and, in cooperation with other organizations, promotes the direct and/or remote observation of water and materials recycling of the Earth’s surface regions by aircraft. We also investigate and promote plans to observe space by sounding rockets and spacecrafts, while collaborating with institutions within Japan and overseas, in order to gain new insight about the physical phenomena that occur in the region between space and Earth.

At the same time, we help advance observation capabilities that will be required for future orbital and suborbital observations by efficiently integrating and sharing the observation technologies and development environments that are necessary for the next generation of instruments, and expanding our interdisciplinary activities. This will enable us to contribute to observation and technical research in related fields, together with researchers and engineers from Japan and overseas, which will lead to the development and implementation of orbital and suborbital observation projects that will bring together the entire fields in collaboration with modeling and ground-based observation.

Here are some details about projects and technological developments that the Center is currently engaged in.

Construction of central base for Japan’s aerial observation

Aerial observation has advantages in that it enables us to observe regions where there are no ground-based facilities and also be flexible in the observation. We can look forward to results that will bring breakthroughs in research, particularly in the direct observation of aerosols and research into interactions between aerosols and clouds, and also in the developmental process of typhoons. Unfortunately, factors such as cost and the need for technical knowhow to install instruments in aircraft have prevented the promotion of research by aerial observation. Nagoya University has a track record in actively promoting aerial observations, making use of its geographical advantage of being close to Nagoya Airport which is a hub for aerial observation within Japan. Organizations such as the Meteorological Society of Japan have great hopes for such observations. At this Center, we plan to create an environment that is efficient and which will also facilitate aircraft testing by building a central base for aerial observation that will be responsible for coordinating research into aviation observation and instrument installation techniques on to aircraft within Japan.

It is extremely important to think about coping with global warming in the future, by making detailed measurements of the concentrations in the atmosphere of the greenhouse gases carbon dioxide (CO2) and methane (CH4) that cause this warming, and estimating the emission, generation, and absorption processes from the observation results. We use comparatively small balloons and are working on the development of devices for measuring the distribution of concentrations of the greenhouse gas CO2 as far as 10 km above the ground. We are measuring the distribution with altitude of CO2 in various regions in Japan and at different locations worldwide. A balloon-borne CO2 sonde can function regardless of the location even when there are clouds. It can also be compared with satellite data. If we can observe the altitude distribution by inexpensive balloon borne carbon dioxide meters, we will soon be able to complete the observation system that will be necessary for predicting climate change, by adding these observations to the existing meteorological observation network.

To lead space exploration missions in future demonstrative space sciences, we are investigating and developing common bus systems for the 100-200 kg class compact satellites. Through our collaboration with a manufacturer with technical expertise of developing scientific instruments for many previous Japanese space exploration missions, we have been working on the following areas together with science and engineering researchers in Institute of Space and Astronautical Science of Japan Aerospace Exploration Agency:

We are integrating investigations in different fields and developing new types of common bus systems for satellites for advanced science observations. This work will allow us to satisfy the requirements for installing antennas and an onboard mast as well as to realize re-orbiting procedures, like perigee increases and changes to the formation flight configuration, and precise attitude controls.

Microsatellite is expected to enable verification of instruments based on challenging technologies and to create new industrial applications of satellites, which will stimulate aerospace industry in Chubu (central Japan) region. The second satellite whose mission includes observations of solar neutrons is launched in February 17, 2016. 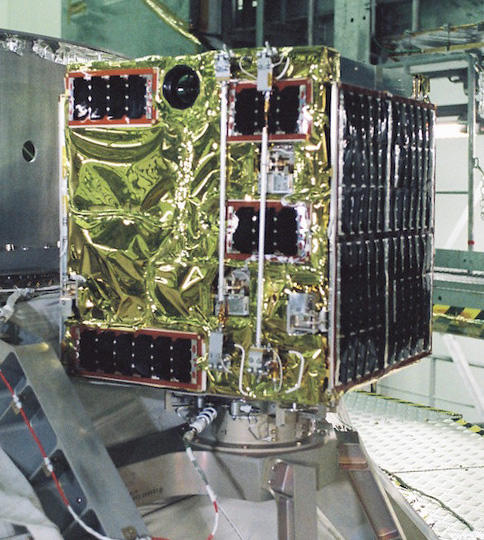